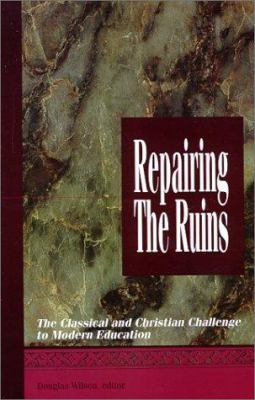 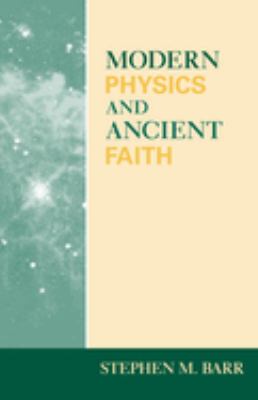 Modern Physics and Ancient Faith by Stephen M. Barr
ISBN: 9780268021986
Requested by Mitch Stokes.
A considerable amount of public debate and media print has been devoted to the “war between science and religion.” In his accessible and eminently readable new book, Stephen M. Barr demonstrates that what is really at war with religion is not science itself, but a philosophy called scientific materialism. Modern Physics and Ancient Faith argues that the great discoveries of modern physics are more compatible with the central teachings of Christianity and Judaism about God, the cosmos, and the human soul than with the atheistic viewpoint of scientific materialism. Scientific materialism grew out of scientific discoveries made from the time of Copernicus up to the beginning of the twentieth century. These discoveries led many thoughtful people to the conclusion that the universe has no cause or purpose, that the human race is an accidental by-product of blind material forces, and that the ultimate reality is matter itself. Barr contends that the revolutionary discoveries of the twentieth century run counter to this line of thought. He uses five of these discoveries—the Big Bang theory, unified field theories, anthropic coincidences, Gödel’s Theorem in mathematics, and quantum theory—to cast serious doubt on the materialist’s view of the world and to give greater credence to Judeo-Christian claims about God and the universe. Written in clear language, Barr’s rigorous and fair text explains modern physics to general readers without oversimplification. Using the insights of modern physics, he reveals that modern scientific discoveries and religious faith are deeply consonant. Anyone with an interest in science and religion will find Modern Physics and Ancient Faith invaluable. 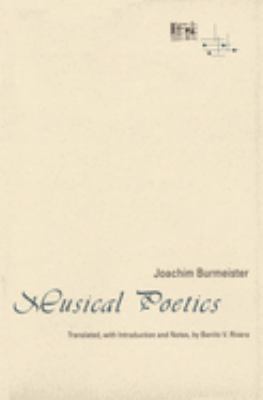 Musical Poetics by Joachim Burmeister; Claude V. Palisca (Editor); Benito V. Rivera (Introduction by, Notes by, Translator)
ISBN: 9780300051100
Requested by David Erb.
Joachim Burmeister's early seventeenth-century treatise on the making of music is generally acknowledged to be central to the understanding of Baroque musical practice: it was the first systematically to explore the connection between rhetoric and music that became a cornerstone of Baroque musical thought. But until now neither a reliable modern edition nor a full translation of this seminal work has existed. This much-needed edition by Benito V. Rivera contains a critical transcription of the Latin text and an annotated translation on facing pages. In a lengthy introduction to the book, Rivera reviews Burmeister's two earlier treatises on musical composition, analyzes _Musical Poetics_ as a whole, and places it within its historical context. An appendix to the edition reproduces the passages of music cited by Burmeister, greatly facilitating the interpretation of Burmeister's explanations of the rhetorical figures. The book will be of interest to music historians and theorists as well as to scholars of rhetoric. 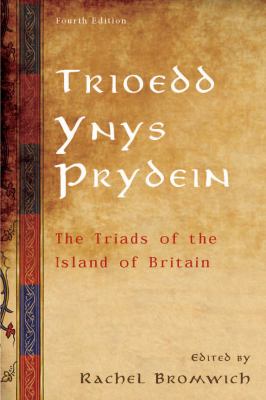 Trioedd Ynys Prydein by Rachel Bromwich (Editor); Morfydd E. Owen (Preface by)
ISBN: 9781783163052
Requested by Peter Escalante.
This critical edition of the classic Celtic text _Trioedd Ynys Prydein_ has long been established as the standard. Based on a full collation of the most important manuscript sources, the earliest of which date to the thirteenth century, this edition presents the full Welsh text accompanied by English translations and extensive notes, along with four detailed appendices. The _Trioedd Ynys Prydein_, or _Triads of the Isle of Britain_, form a series of texts which commemorate the names of traditional heroes and heroines and would have served as a catalog of the names of these heroic figures. This new edition is thoroughly revised and features a new preface by Morfydd Owen. It will be essential reading for Celticists and for those interested in early British history and literature and Arthurian studies.

Reformation Women by Rebecca VanDoodewaard
ISBN: 9781601785329
Requested by Peter Escalante.
Women are an essential element in church history. Just as Deborah, Esther, and the New Testament Marys helped shape Bible history, so the women of the Reformed church have helped to make its history great. In Reformation Women, Rebecca Vandoodewaard introduces readers to twelve sixteenth-century women who are not as well known today as contemporaries like Katie Luther and Lady Jane Grey. Providing an example to Christians today of strong service to Christ and His church, these influential, godly women were devoted to Reformation truth, in many cases provided support for their husbands, practiced hospitality, and stewarded their intellectual abilities. Their strength and bravery will inspire you, and your understanding of church history will become richer as you learn how God used them to further the Reformation through their work and influence. TABLE OF CONTENTS: Anna Reinhard Anna Adlischweiler Katharina Schutz Margarethe Blaurer Marguerite de Navarre Jeanne'd Albret Charlotte Arbaleste Charlotte de Bourbon Louise de Coligny Catherine Willoughby Renee of Ferrara Olympia Morata Conclusion APPENDICES Timeline French family tree Dutch family tree British family tree Bucer's letters to Margarethe Blaurer. 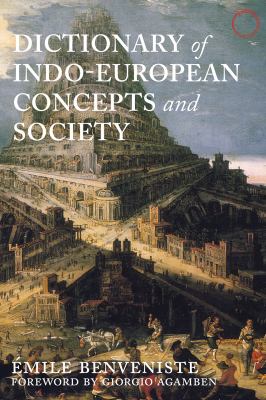 Dictionary of Indo-European Concepts and Society by Émile Benveniste; Elizabeth Palmer (Translator); Giorgio Agamben (Foreword by)
ISBN: 9780986132599
Requested by Peter Escalante.
Since its publication in 1969, Émile Benveniste’s _Vocabulaire_—here in a new translation as the _Dictionary of Indo-European Concepts and Society_—has been the classic reference for tracing the institutional and conceptual genealogy of the sociocultural worlds of gifts, contracts, sacrifice, hospitality, authority, freedom, ancient economy, and kinship. A comprehensive and comparative history of words with analyses of their underlying neglected genealogies and structures of signification—and this via a masterful journey through Germanic, Romance, Indo-Iranian, Latin, and Greek languages—Benveniste’s dictionary is a must-read for anthropologists, linguists, literary theorists, classicists, and philosophers alike. This book has famously inspired a wealth of thinkers, including Roland Barthes, Claude Lévi-Strauss, Pierre Bourdieu, Jacques Derrida, Umberto Eco, Giorgio Agamben, François Jullien, and many others. In this new volume, Benveniste’s masterpiece on the study of language and society finds new life for a new generation of scholars. As political fictions continue to separate and reify differences between European, Middle Eastern, and South Asian societies, Benveniste reminds us just how historically deep their interconnections are and that understanding the way our institutions are evoked through the words that describe them is more necessary than ever. 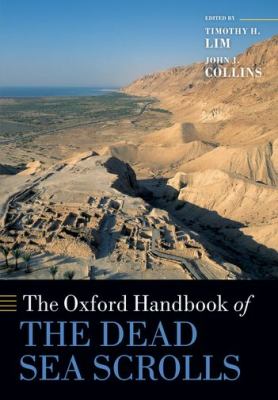 The Oxford Handbook of the Dead Sea Scrolls by Timothy H. Lim (Editor); John J. Collins (Editor)
ISBN: 9780199663088
Requested by Timothy Edwards.
In 1946 the first of the Dead Sea Scroll discoveries was made near the site of Qumran, at the northern end of the Dead Sea. Despite the much publicized delays in the publication and editing of the Scrolls, practically all of them had been made public by the time of the fiftieth anniversary of the first discovery. That occasion was marked by a spate of major publications that attempted to sum up the state of scholarship at the end of the twentieth century, including _The Encyclopedia of the Dead Sea Scrolls_ (OUP 2000). These publications produced an authoritative synthesis to which the majority of scholars in the field subscribed, granted disagreements in detail. A decade or so later, _The Oxford Handbook of the Dead Sea Scrolls_ has a different objective and character. It seeks to probe the main disputed issues in the study of the Scrolls. Lively debate continues over the archaeology and history of the site, the nature and identity of the sect, and its relation to the broader world of Second Temple Judaism and to later Jewish and Christian tradition. It is the Handbook's intention here to reflect on diverse opinions and viewpoints, highlight the points of disagreement, and point to promising directions for future research.
Add a Comment