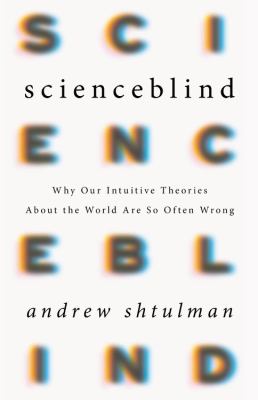 Scienceblind by Andrew Shtulman
ISBN: 9780465053940
Requested by Mitch Stokes.
A FASCINATING, EMPATHETIC BOOK-_WALL STREET JOURNAL_ HUMANS ARE BORN TO CREATE THEORIES ABOUT THE WORLD--UNFORTUNATELY, WE'RE USUALLY WRONG AND BAD THEORIES KEEP US FROM UNDERSTANDING SCIENCE AS IT REALLY IS Why do we catch colds? What causes seasons to change? And if you fire a bullet from a gun and drop one from your hand, which bullet hits the ground first? In a pinch we almost always get these questions wrong. Worse, we regularly misconstrue fundamental qualities of the world around us. In _Scienceblind_, cognitive and developmental psychologist Andrew Shtulman shows that the root of our misconceptions lies in the theories about the world we develop as children. They're not only wrong, they close our minds to ideas inconsistent with them, making us unable to learn science later in life. So how do we get the world right? We must dismantle our intuitive theories and rebuild our knowledge from its foundations. The reward won't just be a truer picture of the world, but clearer solutions to many controversies--around vaccines, climate change, or evolution--that plague our politics today. 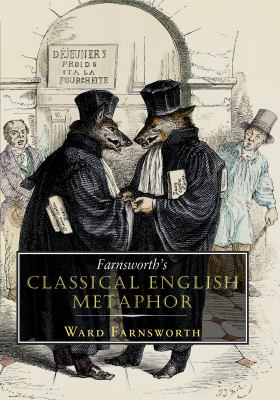 Farnsworth's Classical English Metaphor by Ward Farnsworth
ISBN: 9781567925487
Requested by Peter Escalante.
Farnsworth’s Classical English Rhetoric was the definitive guide to the use of rhetorical devices in English. It became a best-seller in its field, with over 20,000 copies in print. Here now is the natural sequel, Farnsworth’s Classical English Metaphor—the most entertaining and instructive book ever written about the art of comparison. A metaphor compares two things that seem unalike. Lincoln was a master of the art (A house divided against itself cannot stand). So were Jefferson (The tree of liberty must be refreshed from time to time with the blood of patriots and tyrants) and Shakespeare (All the world’s a stage/And all the men and women merely players). Farnsworth’s book is the finest collection of such figurative comparisons ever assembled. It offers an original analysis of patterns in the sources and uses of metaphor. It also explains the different stylistic ways that comparisons can be written, and with what effects. The book starts by dividing the sources of metaphor into families, including nature, architecture, animals, and myth. It then shows how the best writers have put each of those traditions to distinctive use-for the sake of caricature, to make an abstract idea visible, to make a complicated idea simple. The book provides, along the way, an extraordinarily wide-ranging tour of examples from novelists, playwrights, philosophers, and orators. There is interest, instruction, and amusement to be found on every page. Ward Farnsworth-lawyer, dean, teacher, and polymath-has produced another indispensable book for the writer. Classical English Metaphor will be a constant source of learning and enjoyment for anyone who appreciates the art of observation and the pleasure of well-chosen words. 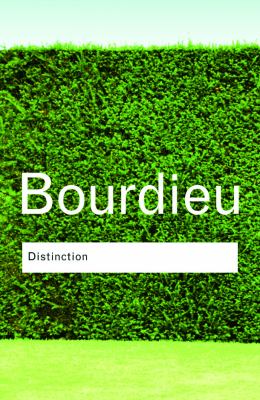 Distinction by Pierre Bourdieu; Richard Nice (Translator)
ISBN: 9780415567886
Requested by Peter Escalante.
No judgement of taste is innocent - we are all snobs. Pierre Bourdieu’s_ Distinction_ brilliantly illuminates the social pretentions of the middle classes in the modern world, focusing on the tastes and preferences of the French bourgeoisie. First published in 1979, the book is at once a vast ethnography of contemporary France and a dissection of the bourgeois mind. In the course of everyday life we constantly choose between what we find aesthetically pleasing, and what we consider tacky, merely trendy, or ugly. Taste is not pure. Bourdieu demonstrates that our different aesthetic choices are all distinctions - that is, choices made in opposition to those made by other classes. This fascinating work argues that the social world functions simultaneously as a system of power relations and as a symbolic system in which minute distinctions of taste become the basis for social judgement. 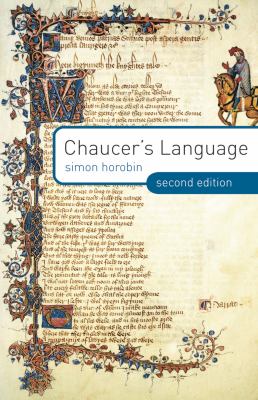 Chaucer's Language by Simon Horobin
ISBN: 9780230293793
Requested by Jayson Grieser.
The English language has changed dramatically over the past 500 years, making it increasingly difficult for students to read Chaucer's works. Assuming no previous linguistic knowledge or familiarity with Middle English, Simon Horobin introduces students to Chaucer's language and the importance of reading Chaucer in the original, rather than modern translation. _Chaucer's Language_ - leads the reader gently through basic linguistic concepts with appropriate explanation - highlights how Chaucer's English differs from present-day English, and the significance of this for interpreting and understanding his work - provides close analysis and comparison with the writings of Chaucer's contemporaries to show how Chaucer drew on the variety of Middle English to achieve particular poetic effects - includes sample texts, a glossary of linguistic terminology, a bibliography and suggestions for further reading to aid study. Authoritative and easy-to-follow, this is an indispensable guide to understanding, appreciating and enjoying the language of Chaucer. 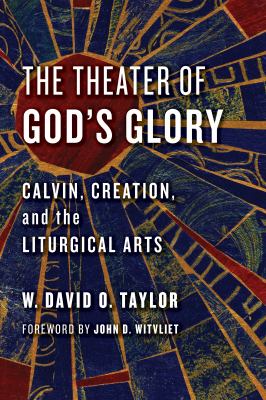 The Theater of God's Glory by W. David O. Taylor
ISBN: 9780802874481
Requested by Peter Escalante.
_A theological framework for the liturgical arts rooted in John Calvin_ Both detractors and supporters of John Calvin have deemed him an enemy of the physical body, a pessimist toward creation, and a negative influence on the liturgical arts. But, says W. David O. Taylor, that only tells half of the story. Taylor examines Calvin's trinitarian theology as it intersects his doctrine of the physical creation in order to argue for a positive theological account of the liturgical arts. He does so believing that Calvin's theology can serve, perhaps surprisingly, as a rich resource for understanding the theological purposes of the arts in corporate worship. Drawing on Calvin's _Institutes_, biblical commentaries, sermons, catechisms, treatises, and worship orders, this book represents one of the most thorough investigations available of John Calvin's theology of the physical creation—and the promising possibilities it opens up for the formative role of the arts in worship. 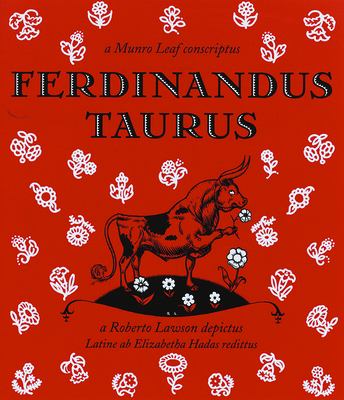 Ferdinandus Taurus by Munro Leaf; Robert Lawson; Elizabeth Hadas
ISBN: 9781567921274
Requested by Peter Escalante.
Once upon a time, there lived in Spain a bull named Ferdinand. While his brothers liked to charge around the field, butt their heads together and to generally act ferocious, Ferdinand liked nothing better than to sit under the cork tree and smell the flowers. He was, you see, a placid and a gentle bull whose only desire in life was to be let alone. And his life would have proceeded very nicely had he not one day placed his considerable rump on a bumblebee on the very same day that five men arrived from Madrid searching for a new star for the corrida. This classic tale by Munro Leaf, which has enchanted children for over fifty years, is here translated for the first (and certainly the last) time into (mirabile dictu) Latin. It comes with a complete glossary of words, and, of course, with the wonderful, appropriate, and droll drawings from the pen of the inimitable Robert Lawson (for whom the book was originally written).
Add a Comment