An Interview with Dr. Harmon on the Synopsis Purioris Theologiae

Last week, we received by mail the recently-completed third volume of the Synopsis Purioris Theologiae series (shown below), ordered at the request of NSA’s own Dr. Timothy Harmon. 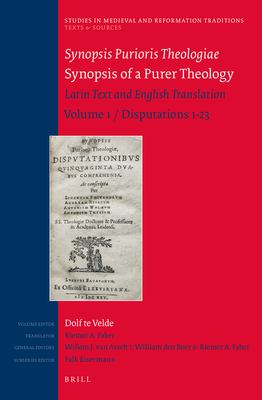 Q: How would you summarize what this work is and its purpose?

Harmon (TH): The Synopsis Purioris Theologiae (“Synopsis of a Purer Theology”), commonly referred to as the Leiden Synopsis, is a seminal seventeenth-century compendium of Reformed theology. It addresses fifty-two topics in a scrupulous yet concise fashion. The scope of the work is comprehensive, offering treatments of the full sweep of major theological loci, ranging from prolegomena to eschatology. Largely occasioned by the Arminian controversy, the work advances a perspective aligned with the conclusions of the Synod of Dort (1618-19). Composed by four Calvinistic professors of theology at Leiden University, it represents a “purer” theology in that it sets forth an account of Christian doctrine that has been purified from error (especially that of the Arminians, Socianians, and Roman Catholics).

Originally published in Latin in 1625, the Synopsis has only recently become available to English readers. In 2015, Brill published the first of a three-volume bilingual version, and the final volume was published in mid-2020. The Brill volumes, included in the Studies in Medieval and Reformation Traditions series, boast parallel Latin and English renderings of the Synopsis, supplemented by fine scholarly introductions and an abundance of well-researched explanatory footnotes. The publication of the Brill volumes has been widely celebrated by theologians and historians as an endeavor of unparalleled significance for the study of formative Reformed thought.

Q: What is the historical significance of this work?

TH: Arminius, prior to his death in 1609, had been a professor at Leiden University in the Netherlands. His teaching had caused a tremendous stir among the more Calvinistic faculty members. In 1610, Arminius’s followers advanced five theological propositions known as The Five Articles of Remonstrance. It was in response to these articles that the Canons of Dort were promulgated (at the Synod of Dort). Shortly thereafter, between 1620 and 1624 a series of theological disputations took place at Leiden University. This disputation cycle intended, in keeping with Dort, to present a system of doctrine that positively outlined Reformed thought, contra those competing systems the faculty deemed erroneous.

The disputation (disputatio in Latin) was a structured method of debate popular in medieval universities. At Leiden, disputations were conducted publicly, and ordinarily involved the presentation of theses on a given disputation by a presiding professor, which students or junior faculty members would debate. Typically, one student (the respondent) would be tasked with defending the theses given by a master, and another student would be charged with arguing against them (the opponent). The process aided the students’ comprehension of a given topic through allowing them to contemplate each thesis in full view of the arguments for and against it. Further, it helped to develop their dialectical and rhetorical skills.

The published form of this disputation cycle, the Synopsis, collated the theses on each disputation drafted by the four Leiden professors: Johannes Polyander (1568-1646), Antonius Walaeus (1572-1639), Antonius Thysius (1565-1640), and Andreas Rivetus (1573-1651). In developing their theses, the Leiden faculty members had labored to produce a unified doctrinal position, and as such the Synopsis provides a uniquely coherent account of early post-Reformation theological thought. As the authors write in the original preface, “there is a total single-mindedness in what we believe and think . . . we share a consensus in all the headings of theology” (volume 1, pg. 27).

The consensus offered in the Synopsis, while motivated by polemical concerns, is notable for the way in which it focuses on essentials and steers clear of trivialities. Related to this, the authors—following Calvin’s example—seek to avoid speculation. Where they perceive Scripture to be clear, they adopt a bold stance. In areas where Scripture is less lucid or silent, they are modest. Along with this, the Synopsis is marked by a desire to approach doctrinal topics in and with the Christian church, broadly conceived. While developed against a background of controversy, its arguments are not overly attuned to the narrower historical moment; rather, they bring to bear the weight of prevailing Christian thought, advanced in the prior patristic and medieval eras.

All in all, the Synopsis is significant for its place in the development of Reformed orthodoxy, and its shadow looms large over subsequent iterations of Reformed theology. Even beyond its influence on later seventeenth century Reformed thought, its fingerprints are conspicuous in the writings of Reformed thinkers such as Herman Bavinck and Heinrich Heppe. Today, it is of ongoing relevance for the way in which it affords a confessional and careful account of chief doctrinal loci, explicated in line with the “three forms of unity” which define the Reformed tradition.

Q: Why do you think it is important that the Library have this work?

TH: Considering what has been sketched above, the Synopsis is a crucial text for those interested in the development and distinctives of Reformed orthodoxy. The fact that the Brill volumes supply a parallel Latin-English edition with critical notes addressing matters both philological and philosophical only enhances their import for students of New Saint Andrews College. I am deeply encouraged that the Library has acquired these volumes and look forward to the good fruit that will result as students read and digest this work that has contributed so much to the Reformed heritage of which they are heirs.

The first two volumes of the Synopsis are currently available for checkout (found under the call number "230.42 Synopsis"); the third volume is currently being processed and will be available soon.