Who was Earl Wright Shimmons? Likely, you have not heard of him--he is not a well-known or discussed figure in history. However, Tyndale Library happens to have within its archives three fascinating scrapbooks, put together by this gentleman in the early 20th century. The book I will focus on in this week’s post (shown below) contains clippings related to labor issues in Tacoma, Washington. Most articles appear to come from the Seattle Union Record, a pro-union newspaper published by the Seattle Central Labor Council. Interspersed, however, are some from other sources. Given the cut-out status of the articles, it is frequently not possible to see the source—a fact that presents one of the key challenges in reading this scrapbook. 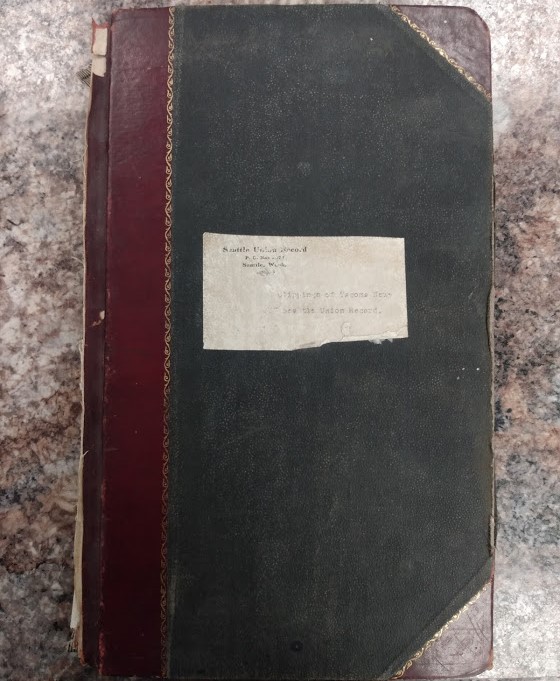 Shimmons himself lived in the Tacoma area (possibly not in Tacoma itself). He was himself a journalist, and appears to have helped the Union Record with stories on occasion (see the letter below, part of the collection of clippings, along with the story which it references). 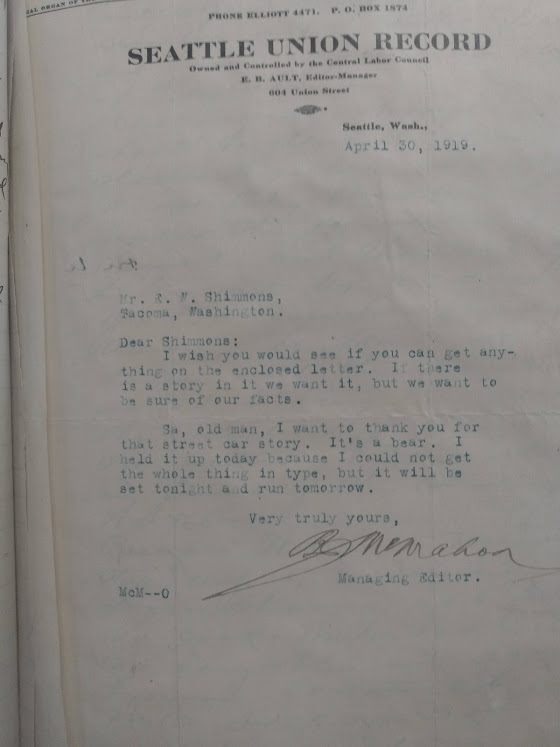 Given the content of Shimmons' clippings through the three scrapbooks, he himself seems to have been a pro-union labor reform advocate, as well as a socialist. Additionally, the Union Record clippings appear to have been pasted over a book of meeting minutes for the Tacoma chapter of the I.W.W. (Industrial Workers of the World). The I.W.W., an international labor union, had a reputation for being quite radical, as we will see. They were not always popular even with the pro-union crowd.

The news stories featured in this scrapbook mostly come from the year 1919, which was a quite significant year for the I.W.W. in Washington. Leading up to that year, the I.W.W. had developed a hostile relationship with the American Legion, an organization of veterans, who suspected the I.W.W. of being traitors to the country. On November 11, during the Armistice Day parade in Centralia, Washington, gunfire broke out between members of the two organization, leading to the deaths of four American Legion members and the subsequent lynching of one I.W.W. member.

Prior to this event, Shimmons catalogs mostly articles that are local to Tacoma. The Centralia massacre, however, occurring just 54 miles from Tacoma, was clearly important enough for him to provide the exception. The nearly 300 pages of this scrapbook are too many to adequately summarize in a blog post of this scope, but I will provide below a few highlights.

SOME HIGHLIGHTS FROM THE SCRAPBOOK

On April 5, 1919, Tacoma police arrested members of the Soldiers and Sailors Council who were holding a "tag day" fundraiser to aid unemployed veterans. In a tag day sale, people would give money in exchange for a tag showing that they had contributed to the cause. According to the Union Record, Tacoma officials opposed this event because "there have been too many tag days in Tacoma for various causes, and [because] many of the men in the Soldiers and Sailors Council are 'un-American'" (p. 62). 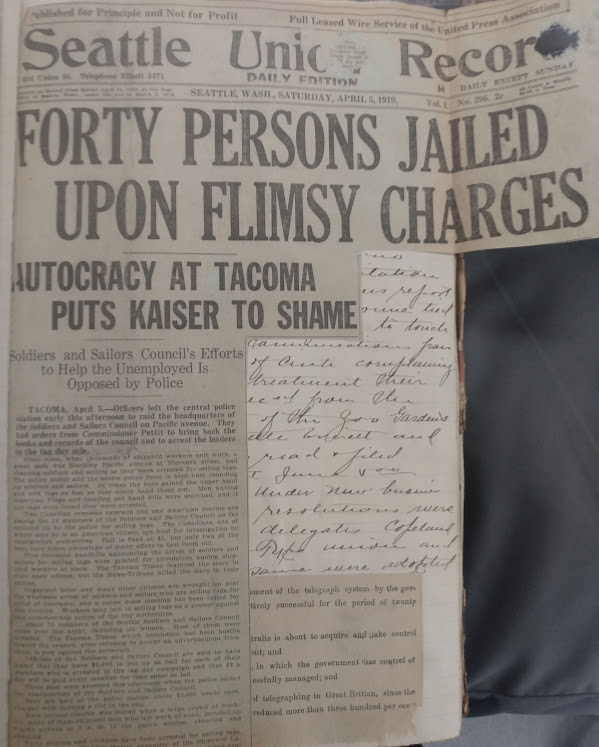 This event, and the ensuing legal battles, would prove to be Shimmons' most documented story prior to the Centralia massacre. Pasted along with the articles are a few of the tags themselves; Shimmons himself, as one would expect, was an active participant in these events. 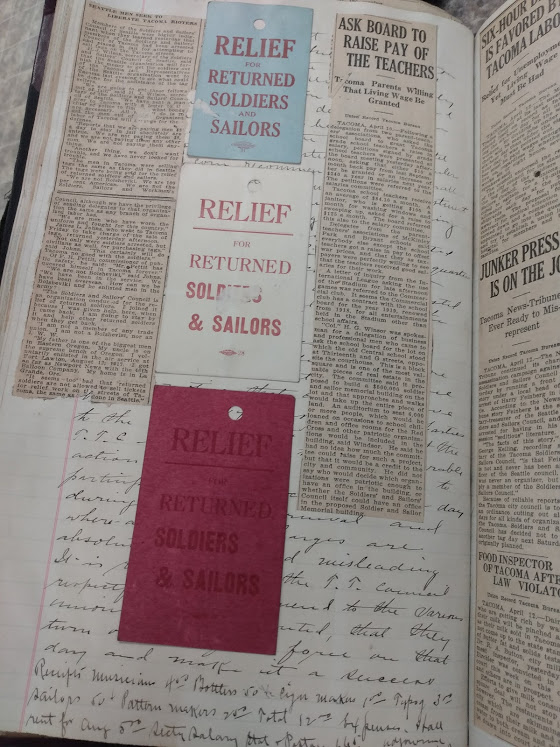 The Centralia Massacre: Who Was Responsible?

Both sides of the conflict in Centralia emerged with their own stories as to how it began. Most of the clippings, however, have no issue with painting the I.W.W. as the responsible party, such as the one below. 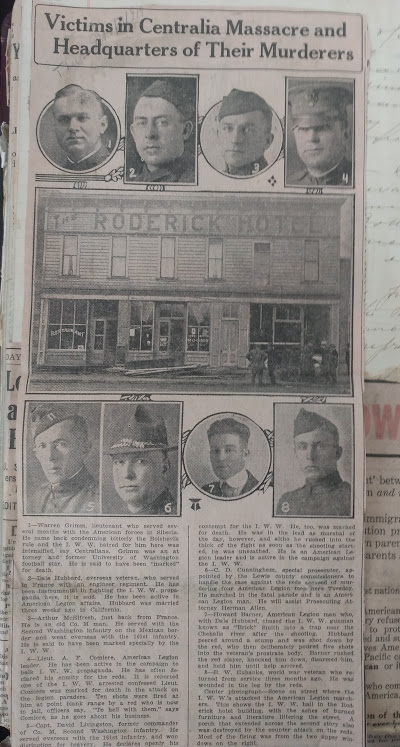 Even the Central Labor Council (publisher of the Union Record) made sure to distance themselves from the I.W.W.’s actions, despite both groups being union advocates: 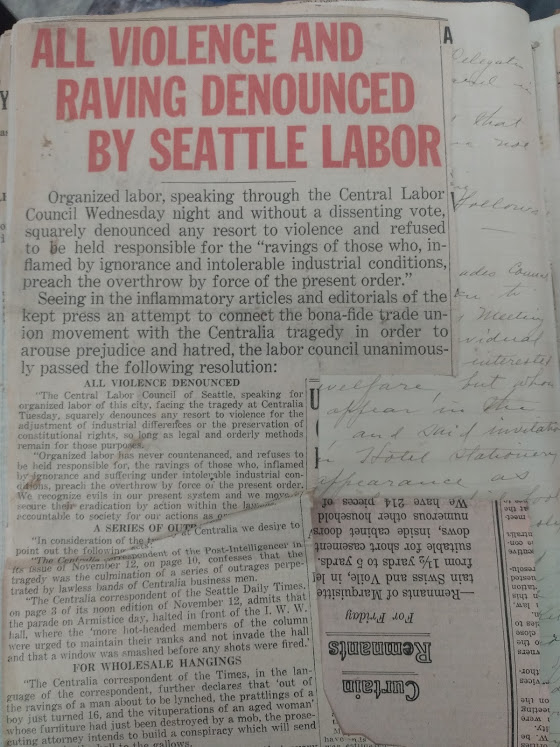 Did the Union Record Have a Soft Spot for The I.W.W.?

Despite its denunciation of the violence, the Union Record was also hesitant to put blame squarely on the I.W.W.; below we see them refusing to comment until the facts are sorted out: 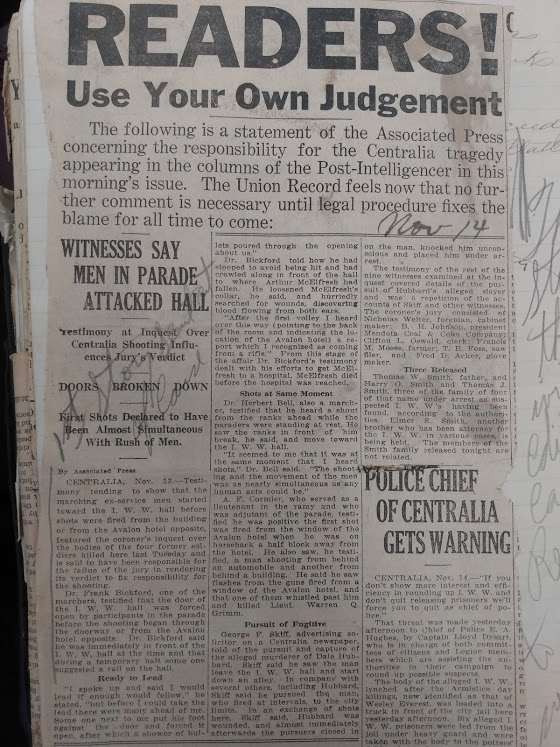 To those who vigorously opposed the I.W.W., however, the Union Record’s attitude seemed a sure sign that they were friends of the I.W.W., and by extension, of the Bolsheviks: 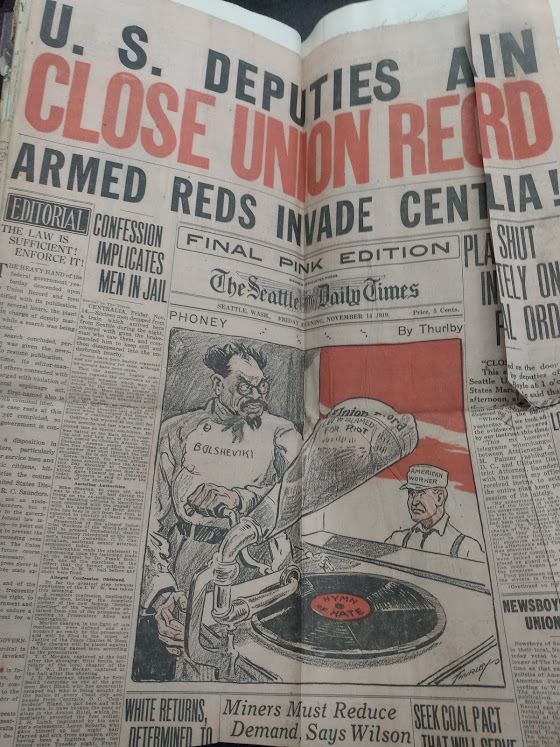 So severe was distrust of the of the Union Record, that it was raided by government agents: 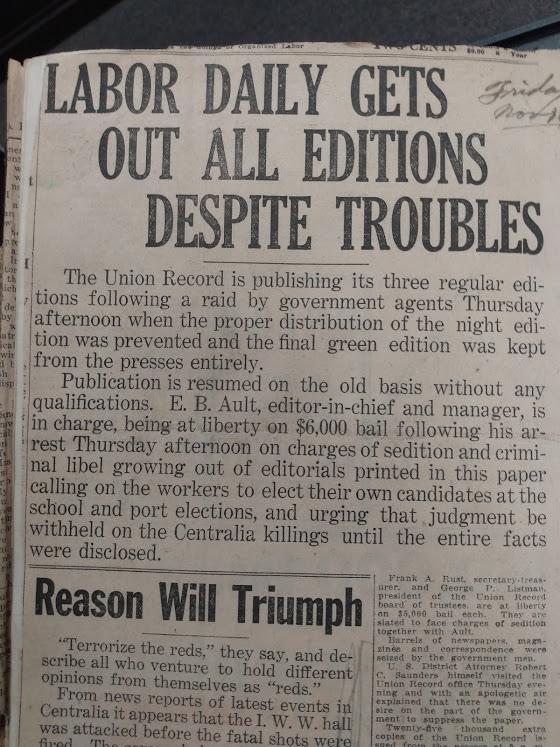 What Shimmons himself thought about all this is unclear. If he himself was a “Wobbly”—as I.W.W. members were called—it seems likely that he would have sided with them in the conflict. Certainly, the ground is ripe for a more in-depth study of this resource—perhaps by a student in Dr. Schlect’s history class.

Finally, keep in mind that there are two more scrapbooks by Shimmons in the archives: one focused on socialism, and another in which he provides fascinating commentary on his own field of work—journalism.

Special thanks to Ninja Belle Iverson, who recently cataloged Shimmons' scrapbooks, and was thus able help with the research process.